Opium Tales – The Drinker with the Painting Problem

This might be a bitter pill, red or otherwise, but it’s the truth.

Women put up significantly fewer barriers in front of their sexuality for men who are physically attractive and high-status.

They’re as superficial as we men can be.

Which isn’t a bad thing. We have a right to our preferences in who we want to have sex with. 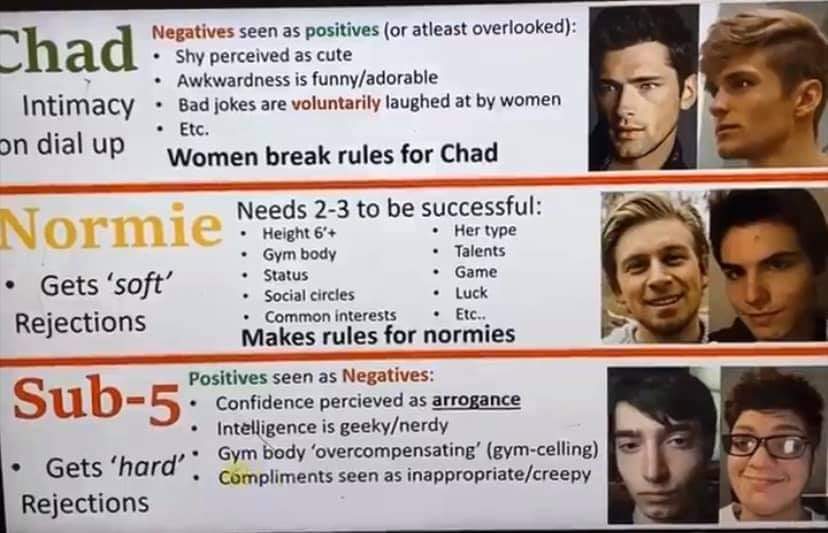 However, I DESPISE this “women break rules for Chad” thinking, however true it is. And I want to deter guys from being hung up on it. Understand that it’s part of the picture, then move past it. It’s not the entire picture.

Because while yes, women, especially very attractive, beautiful women, are WAY more open to being with good-looking men than average-looking ones…

Looks are only one variable of attraction, especially in men.

And if you assume looks are the end-all-be-all of men’s attractiveness to women, you will self-sabotage with women who would have liked you for YOU while giving your attention to women who DO only want the Chads, regardless of all other variables. These women objectify themselves as much as the men they want to be with, so don’t worry about them. You don’t want a dating life built on objectification. I assume.

However, moving through the dating world as a good-looking, physically capable man is like driving on the highway in a Lamborghini compared to in a 2002 Honda Civic. Both these cars will get you where you wanna go. The question is, how quickly?

Not-so-good-looking men CAN be, and often are successful with women through their status, money, game, masculinity, and ability to connect with women individually, personally, psychologically, and spiritually.

But optimizing your looks makes it significantly easier for a woman to consider you as a sexual option, especially if you’re lacking in the above domains.

Now, let me tell you WHY looks matter in men and women.

Her body is the environment where your children will develop in the first 9 months of their existence. Knowing this, the above makes complete sense. A woman who’s young, hot, and fertile will give your offspring the best possible genes.

So what’s the male equivalent to this?

Women universally desire men whose looks communicate the ability to attain status and resources. No matter their subjective preferences in our looks.

The primal part of a woman’s brain invariably desires height, strength, and physical potency in men. She wants to feel small, submissive, and safe around you. The primal side of her brain demands you be physically robust, capable of conquering your environment and protecting her from physical threats.

That’s why you need to get in shape if you want your best possible results with women, ESPECIALLY if you’re a shorter guy or a guy who isn’t too socially gifted. Putting on muscle mass, losing fat, and building up your body’s physical capability won’t simply turn on women’s hindbrains. It’ll also boost your testosterone and make you feel better about your looks. There is no downside to it, aside from how hungry you’ll likely be all the time.

The social side of women’s brains isn’t so straightforward, and it can even get her resenting and avoiding the masculine traits her primal brain wants (though not any less turned on by them). This part of her brain demands you look (and act) like the type of man who’d be high-status in her world.

Archetypes play a major role here, especially if you’re trying to seduce a woman who doesn’t have her shadow integrated.

Raw masculinity and big muscles can get your foot in the door, but how accepted you’d be in her world (or her ideal world) plays a major part too.

A physically robust, healthy man will turn a woman on, in that he can provide protection and resources through physical means, as well as dominate other men who may dare to harm them or steal her away.

A man who fits the archetype of what’s “cool” or socially valuable however, will attract a woman through the promise of giving her protection and resources through social means. The two of them won’t get hurt, and she won’t be stolen away, because a man who tries something will incur social consequences.

The former variant of an attractive man is directly dominant – if his or the woman’s security is threatened, HE’LL be the one defending them.

The latter is indirectly dominant – if his or the woman’s security is threatened, HIS ENVIRONMENT will defend them.

Plenty of men rely more strongly on one or the other, but that’s no excuse not to develop the one you’re weaker in. If you’re a man who’s masculine and in great shape but isn’t superficially socially successful, women will be primally attracted to you but plenty will resist you or simply not feel much common ground with you. Relying on looks alone to get women will get you one-night-stands and sexually charged interactions, but not much else.

If you’re a man who’s “in the crowd” and successful, but average-looking, women will be at ease around you and even want to date you sometimes, but your interactions will lack a certain primal, sexual, polar spark.

Don’t let either your physical dominance or social value make you a one-trick pony, or else you may get women quickly, but also lose them just as quickly, since your relationship refuses to evolve or be dynamic.

How much do looks really matter compared to everything else?

Individual attraction matters immensely as well – IQ/intelligence, how much responsibility and awareness one has for their trauma and baggage, personality integration, age and maturity, emotional health, self-perception, personal history, energy and vibration, subjective values…

How strongly each of those fundamentals of attraction is prioritized depends on the individual.

So again, some attractive girls DO only want the most superficially good-looking, Chadliest guys at all costs. They will automatically write you off if your height is beneath a certain number, if you have glaring physical imperfections, if you don’t have the cool “Instagram lifestyle”, or if you try to be a decent guy to them instead of a success object. They will make every excuse to stay around a guy who’s “Chad enough”, even if he’s weird, deranged, a loser, or even abusive in some cases.

However, you need to be aware of what kinds of girls these are. They’re near-invariably immature, selfish and non-giving, and they don’t see much worth liking about themselves beyond their own looks and sexual/social market value. A girl who rejects you for purely superficial reasons isn’t the type of girl who’d make you any happier, even if she was set on being with you! I’ve seen what sorts of relationships these girls end up co-creating with the guys they want – vapid, shallow, narcissistic ones.

So gents, while you SHOULD take care of your looks and aim to be the most physically attractive man you can possibly be. As well as only dating women who turn you on physically…

You should see physical attractiveness as only one box to check in your dating life.

There is no such thing as a perfect man or a perfect woman, physically or otherwise. Plenty of attractive women WILL 100% give you a shot for social and individual reasons even if you’re not a conventional “Chad”. These women may be good-looking, but they appreciate more about themselves than the superficial things. THESE are the women you should set your sights on being with, but never assume they dismiss the value in men’s looks and social status.

Improve what you can about your looks, make peace with what you can’t, and pursue women for higher reasons than “she’s hot”.

(after all, you shouldn’t settle for women who don’t turn you on)

What else does she offer? Is she intelligent? Generous? Giving? Vibrant? Responsible? Honest? Aligned with the man you truly want to be? An asset to your energy, not a drain on it?

And assuming she’s worth more than a quick fuck, she’s evaluating you the same way.

Looking like a male model will give you many opportunities with women, but if you lack game and self-direction, if you have a passive or needy personality, you’ll be a boytoy or a trophy husband at best, not the man she’s really willing to give herself to. Women fuck-and-chuck men they’re only superficially attracted to all the time!

Understand the value of looks, but don’t pedestalize them. Don’t give yourself the burden of perfection over them.

Or else you’ll objectify yourself as much as the women you want, and self-sabotage with the ones who are attractive AND want to connect with you through more than just your looks and status.

As well as receive more in-depth wisdom about how women truly work, calibrated to your personal situation in dating…

See me in coaching!

I'm a gent, a savage, and a ray of sunshine. View all posts by Ben Foth